Dementia can be a particularly cruel condition, people with it often experience changes in their emotional responses, have less control over their feelings, endure mood changes and memory loss and may also appear unusually distant or uninterested in the world around them.

One of Wales’ leading dementia charities, they started in South Wales but have now expanded across the country and now into the rest of the UK.

For over 10 years they have been organising joy-filled singing sessions for people with all forms of dementia, as well as the families, friends and professional staff looking after them. Today, over 1000 people – from millennials to centenarians – participate in their singing sessions every week.

Their aim is to bring joy and laughter to those living with or alongside dementia and every member of their team is deeply inspired by music, and they want to share their passion for singing, in a setting where everyone can feel happy contributing, whatever their ability. Through their community choirs, they hope to foster a sense of worth, and enrich the lives of those affected by dementia – by creating a new group of friends to belong to. 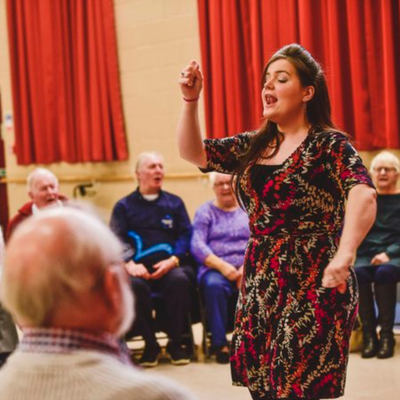 Through four community choirs, twenty ‘Singing Strong’ care home choirs and one hospital choir, they reach over 1000 people a week and also offer a pre-recorded singing sessions for those in care homes.  Those who benefit are of all ages and include those with young-onset dementia and Alzheimer’s, their families, and those who care for them.

This fantastic cause, has benefited from one of our grants and we asked Poppy Nicholas, their Engagement Producer, about what this meant to them: "We were delighted to receive a grant from Western Power Distribution in partnership with Localgiving, to support our work in providing joy-filled singing sessions for people with all forms of dementia, as well as the families, friends and professional staff looking after them. Today, over 1000 people, from millennials to centenarians, participate in our singing sessions every week, across Wales, and further afield."

And now, the Forget-me-not Chorus, in partnership with the ‘Arts for Health and Wellbeing’ programme run by Cardiff and Vale University Health Board, is bringing a new chorus to Cardiff to support those who are bereaved after having cared for a loved one with dementia. Their first session is 22nd September, 6:30-8:30pm at Canton Uniting Church, Cowbridge Rd East, Cardiff CF5 1LQ, so please spread the word!