Blooming Marvellous – community gardens and how to fund them

Over the course of the pandemic, access to green spaces has become increasingly important. People are recognising the benefits of connecting with nature, growing their own food and the positive impact being in the great outdoors has on your mental well-being. Sadly, according to data from The Office of National Statistics, 1 in 8 households in the UK did not have access to a garden during the pandemic; with people from ethnic minorities being even more adversely affected and black people in particular are four times less likely to have access to a garden.

This growing disparity has prompted a rise in the number of community gardens being created across the UK and they are looking fantastic just like Erw Dewi/Dewi’s acre in St. Davids, Pembrokeshire.

EcoDewi, a community environmental group focused on the St Davids Peninsula, joined the Crowdfund Wales Programme back in March to raise some much needed cash for their new community garden – Erw Dewi. Jeremy Wadia (Co-founder) approached Localgiving as he had little previous experience of online fundraising but had a clear vision for a disused plot of land by St Davids Cathedral which they had started to cultivate. Working in collaboration with the Cathedral, the group had 3 clear aims to raise money for: building a potting shed, producing a wildlife pond to increase biodiversity and transforming some land with a large laurel bush into a jungle play area for children. All in all some fantastic ideas, but they couldn’t do it without more money in the pot and the time and commitment of local volunteers. The target that EcoDewi set was £2000 hoping that they would raise £1750 independently and then unlock their matchfunding grant of £250 along the way. 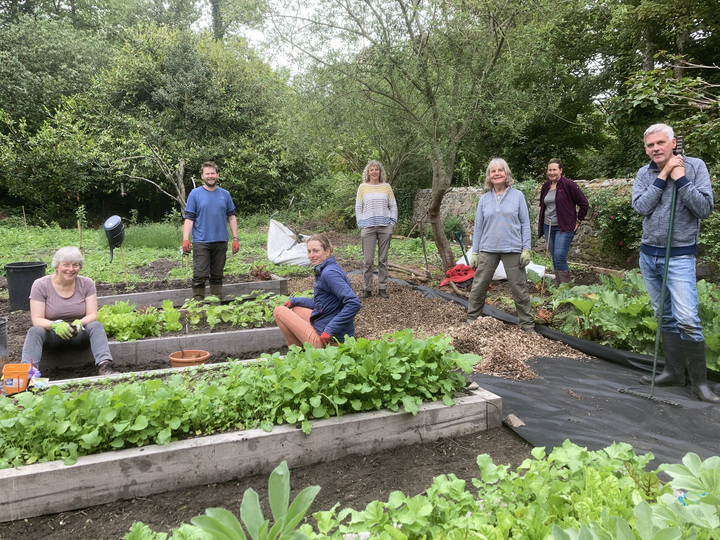 After joining the programme, the first thing they did was talk through how it would all work and make sure that there was time and resource in place to promote the appeal. The page had to stand out from the competition and really connect with the community. Jeremy decided to produce a short video to add to the appeal page, describing the work that needed to be done and specifically what the money raised would go towards.

The next thing we discussed was how to make the best use of both personal and professional networks to promote the campaign and to reach out to donors. Jeremy decided that a longer running time would work better to allow for some events that were taking place where he could actively promote the project and where there was already buy-in.

They smashed their target and the appeal is now closed but it has moved across to a project page so that they can continue to keep their generous donors up to date with news about the garden and they can also upload new photos to show how things are progressing.

Along the way, EcoDewi was awarded a Magic Little Grant, distributed by Localgiving and funded by the players of People’s Postcode Lottery but it was decided early on that this money would not specifically go towards the garden but would encourage people to take part in additional activities to further enhance biodiversity in the area. The cause chosen was their Mini Meadows project which aims to encourage local residents and organisations to reduce grass mowing regimes and allow areas to grow and develop into small wildflower meadows. As part of this project, EcoDewi gives participants a recycled wooden blue heart, inspired by the Blue Campaign’s effort to re-wild Britain’s gardens. The Magic Little Grant covered the marketing and materials needed to get this off the ground across the St. Davids Peninsula.

So far so good for EcoDewi, having raised a total of £3,438 and now promoting regular donations to ensure their work is funded into the future.

To find out more about the Crowdfund Wales Programme, click here.