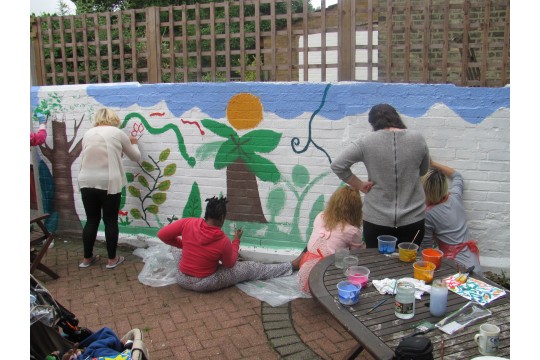 Mural painting at a hostel.

Street Talk provides therapy for vulnerable women including those in street based prostitution and those who have been the victims of trafficking. We listen to each woman's personal story and work with each woman to enable her to overcome the particular obstacles which keep her trapped in a life of exploitation.

When the most excluded and vulnerable women who are trapped in street sex working in the street prostitution get the help they need it benefits the whole community. Nobody wants to live like that and when those women get the help they need the community is a safer and a happier place. It is heartbreaking to walk past someone rough sleeping, begging or semi unconscious on the pavement. By supporting Street Talk you can help women get off the street.

One of the women we are working with now was unconscious on the pavement when we first met her. She was addicted to heroin and crack, was sex working and shop lifting to support her habit, she was homeless and in and out of prison. She had had four children taken into care. Since working with Street Talk she is drug free, living in her own home with her fifth child and is setting up a charity to support people who have to go to court alone. She is just one of many women who have recovered.

Someone to help out on social media and raise our profile.

Cyfrannu nawr
Cyfrannu bob mis
Beth allai eich rhodd ei sicrhau
£10
One woman could accompanied to court
£20
Childcare to allow a woman to attend a job interview
£40
One counselling session for a woman who has been raped
Codi arian i ni!
Gwybodaeth am yr elusen